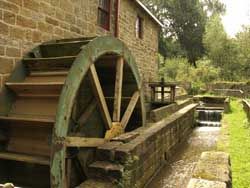 Recovered from Guyzance Mill in 1994 it was stored and refurbished in the stables at City Farm before it was installed in our restored wheel pit at Path Head in 1997, ready for the mill opening in March 1998. His Grace the Duke of Northumberland, who donated the wheel, officially opened the mill in May 1998.
The stonework for the headrace and overflow channel was rebuilt using recovered stone from a demolished railway bridge in Byker.

Aquair 12v Generator. A propeller turbine, which can light an LED display.

These parts, recovered from Acomb are reassembled as a static display. The water wheel was in bits at the bottom of the wheel pit, as a result of a large fire at the mill. Only half of the wheel survived the fire.
Before the fire, wheel was already redundant, as the axletree through the centre had snapped and was replaced by a steam engine to power the mill. Acomb mill machinery was donated by Peter Wilson. 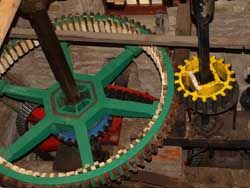 From upstairs on the balcony, you can see below the wrought iron drive shaft coming into the mill from the water wheel outside. The large red gear (Pit Wheel) set into the pit in the floor is on the same shaft as the water wheel. This meshes with blue gear (Wallower) to drive the mainshaft of the mill. From here, the large green gear (Great Spur) drives the yellow gear (Stone Nut) to increase speed. From here, each step increases the speed of the overhead line shafts, from the pulleys on these shafts a belt takes the drive down to power the woodworking machines. There is a wood turning lathe, bandsaw and a surface planer all powered by the wheel.